Principles of the Anodizing Process

Exposed to the earth's atmosphere, aluminum combines with oxygen to form a protective surface film which inhibits further oxidation of the aluminum. Unlike steel or iron alloys, aluminum will not continue to oxidize (rust) once this protective layer is formed. This natural oxide is extremely thin and loosely adhered to the aluminum surface, however, and is easily removed by handling. Anodizing is a process which thickens the natural oxide film resulting in a heavy aluminum oxide film of controlled thickness having the hardness similar to that of a ruby or sapphire.

When aluminum is anodized conventionally, direct electrical current (DC) is passed through a bath of sulfuric acid -- the electrolyte -- while the aluminum being treated serves as the anode. This produces a clear film of aluminum oxide on the aluminum's surface. Electron microscopy indicates that this layer is mostly porous with a very thin barrier layer at the base. This structure lends itself very well to electrolytic coloring or absorptive dying.

During the anodizing process, several controls are critical to assure the specified film thickness, its abrasion resistance and density. These controls include a precise combination of chemical concentration, temperature and current density. In the production of quality anodized products, there is no alternative to having sophisticated monitoring equipment and highly-trained, experienced personnel. The company you choose for your anodizing projects must be able to demonstrate these qualities. 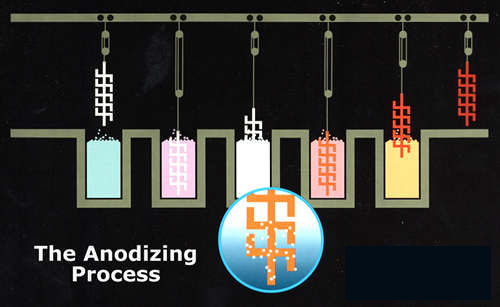 Anodizing: Aluminum is immersed in a tank containing an electrolyte having a 15% sulfuric acid concentration. Electric current is passed through the electrolyte and the aluminum is made the anode in this electrolytic cell; the tank is the cathode. Voltage applied across the anode and cathode causes negatively charged anions to migrate to the anode where the oxygen in the anions combines with the aluminum to form aluminum oxide (Al2O3).

Coloring: Anodic films are well suited to a variety of coloring methods including absorptive dyeing, both organic and inorganic dyestuffs, and electrolytic coloring, both the Sandocolor® and Anolok® processes.

Sealing: In all the anodizing process, the proper sealing of the porous oxide coating is absolutely essential to the satisfactory performance of the coating. The pores must be rendered nonabsorbent to provide maximum resistance to corrosion and stains. This is accomplished through a hydrothermal treatment in proprietary chemical baths or by capping the pores via the precipitation of metal salts in the pore openings.

The quality of finished aluminum extrusions and anodized products is a function of the knowledge, experience and capability of the people and equipment used. To achieve our first-rate extrusions and anodized finishes, meticulous attention is paid to every detail -- from using the finest aluminum and press practices to maintaining the tightest chemical and electrical controls. With more than a century of combined metallurgical, chemical and anodizing experience, our people apply their skills in our custom-designed, technologically-advanced aluminum extrusion and anodizing facilities. Our in-house laboratories, equipped to handle all critical testing procedures, continually monitor each production run. We're proud of our proven ability to consistently provide the highest quality aluminum extrusion and anodizing products possible. Come in and visit - you can see for yourself.

Many customers choose to work with Bonnell Aluminum because we offer a comprehensive spectrum of anodizing processes. We have become an expert at anodizing fabricated parts and welded assemblies. As with many projects, aluminum extrusions often require additional processes to meet the customer's finished part specifications. Bonnell Aluminum offers extensive capabilities to supply such finished parts.

Clear sulfuric anodizing is an electrochemical process in which aluminum is immersed in a sulfuric acid electrolyte through which electrical current is passed. The aluminum is the anode and the tank is the cathode. Voltage applied across the anode and cathode causes negatively charged anions to migrate to the anode, where the oxygen in the anions combines with aluminum to form an aluminum oxide coating. The coating may be produced in various 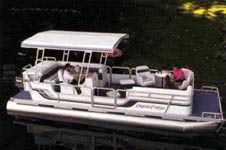 Production of absorptive dyed finishes starts with conventional sulfuric acid anodizing in which a clear aluminum oxide film is produced. Specifications for anodic film thickness and density are critical at this stage. The anodized aluminum is then immersed in a heated solution of either organic or inorganic dyestuffs. The dye is absorbed into the pores of the anodic coating providing a pigmentary color to the surface of the aluminum.